VOODOO, A TABOO, AN ANCIENT RELIGION OR AN ARTFORM

African art has spun across many forms and morphed into what we see now. Africans have always been crafty, finding beauty in wood carvings, bronze sculpting, weaving, threading, pottery, and more.

Vodun Art is associated with the West African Vodun religion of Nigeria, Benin, Togo and Ghana. Its art forms include bocio, carved wooden statues that represent supernatural beings and may be activated through various ritual steps, and Asen, metal objects that attract spirits of the dead or other spirits and give them a temporary resting place. (Wikipedia 2021)

Traditional African art has often been associated with voodoo and frowned upon. Especially wood and bronze work being victims of neglect and often discouraged.

Voodoo or witchcraft as the West would call it is a traditional religion, a practice that spans across a way of life of a people, which is still practiced to this day in many parts of Africa and the world. There are common misconceptions of voodoo such as people sticking needles into dolls to cause misfortune to their enemies, as seen in some Western films (BBC.com, 2011).

Then arrival of Western religion to most parts of Africa, essentially replaced such traditional practices and its characteristics which often included its art. Religious practitioners now deemed foul, unpleasant, evil and wicked. Thus, resulting in the demonization of vodun art.

“Colonialists demonized voodoo to the point where even the word makes you think of backwardness, something derogatory. But it is as much a part of African heritage as Buddhism is to Asia, and much older [than Buddhism]. All the good in voodoo has been tainted,” Benin voodoo priest Dah Dangbénon said (TheGuardian.com, 2012) 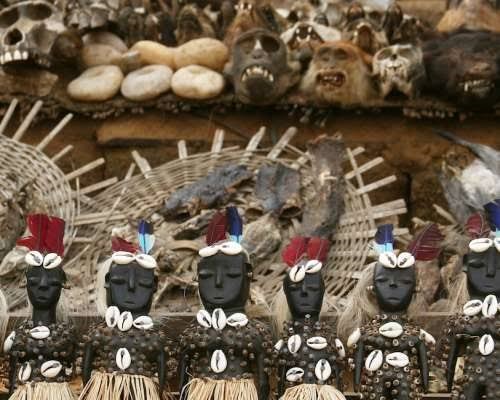 Voodoo is said to have been born in the kingdom of Dahomey. In 1993, Benin celebrated the removal of restrictions on Vodun in that country and began a revival of Vodun, and every year since then they have dedicated January 10th to Voodoo day in Ouidah; a celebration of art and culture (Afrikaris.com 2019).

MY BODY IS THE CANVAS

Are Women the Key to the African Economy?

ARTTA is a fun, curated experience for any art enthusiast, collector, or anyone interested in African culture and art. Our aims to present established and ...

This website uses cookies to improve your experience. We'll assume you're ok with this, but you can opt-out if you wish. Accept Read More